Jump into the shoes of your favorite characters in this zombie idle defense game and blow endless zombie brains out.

Hit the road and go on zombie-smashing adventures with your favorite wisecracking survivors.
Remember the rules and BE A HERO as you collect heroes and lead your squad in this epic zombie shooting game. It’s time to NUT UP or SHUT UP!

Set in the post-apocalyptic doomsday universe, you’ll build upgraded squads of quirky characters, level up with devastating defense equipment, and survive incremental grinding levels of difficulty against grueling zombies in these addictive idle rpg adventure games. Defend yourself and your squad against vicious idle zombie attacks or suffer the consequences.

HIGHLIGHTS
THE BUDDY SYSTEM
How do you survive a zombie village world? Rule #29: The Buddy System. In this idle rpg game you collect heroes, including all-new characters.

SEAT BELTS
Buckle up hero, you’re in for a grinding & exhilarating zombie defense adventure. Put the pedal to the metal and roadtrip across America through Boston, Las Vegas, Atlanta, and more! Send multiple squads out in this zombie clicker game to rake in more upgrades & loot to level up in multiple defense games!

DOUBLE TAP
One in the chest, one in the head! Tap to target zombies as you defend from and attack swarms of the undead. Activate and unlock unique and fun abilities for each hero. Tap to upgrade your characters with weapons and new upgrades to win the epic zombie idle war.

SHOOT FIRST
You’re going to need to pack a punch to take on gigantic waves of idle zombies and zombie village bosses in this defense game. Idle upgrades are the name of the zombie shooting game. Collect and upgrade tons of deadly weapons including rifles, pistols, machine guns, and knives! Shooting zombies has never been more intoxicating!

EASTER EGGS
Quips, banters, and one-liners are all included in this zombie attack rpg idle game. Everything you know & love about zombie games is packed into this zombie clicker game’s escapades!

NEW GAME MODES
Tower of Babylon
The epic zombie tower nonstop idle clicker game. Your epic goal? Defend your way to the top to claim shards from a mystery hero by shooting zombies. To win, you’ll need to battle your way up the tower by utilizing different characters, weapons, and attacks. Beware! Shooting zombies becomes incrementally harder as your idle defense gets stronger with upgrades and skill.

Kill of the Week
Put your afk game skills to the test and compete against other heros for the Kill of the Week. Pick your poison and choose from 5 leagues with different rules & regulations. You’ll collect points and whoever comes out on top of the classification at the end of the event will receive special rewards & upgrades. It’s rpg idle war! Will you be on top of the zombie defense list? 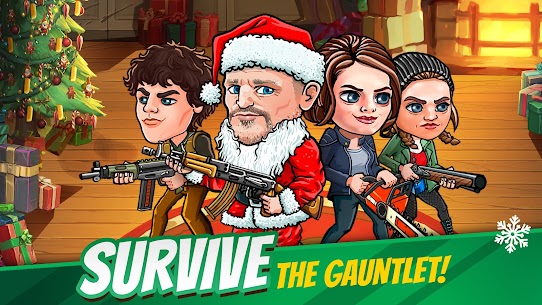 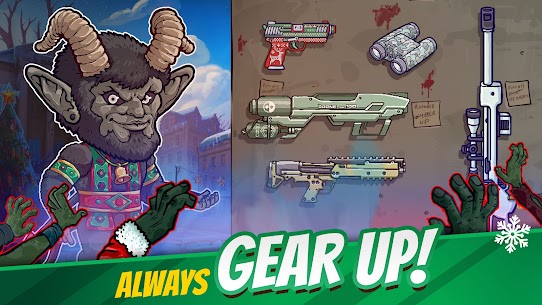